Have you ever stood at the dessert table of a holiday party or family get-together and found yourself asking, "What is a bundt cake?" That's a great question, so we decided to dig in and find the answer!

At its core, a bundt cake is any cake made using a bundt pan. It is not the cake's recipe or flavor which make it a bundt cake, but its unique shape. While some recipes are more popular for bundt cake than others, technically any cake can be a bundt.

So what is a bundt cake? Why is the bundt cake such a common dessert at social gatherings? And where did this cake shape first appear in baking history?

Quick Navigation
The History of the Bundt Cake
Getting the Most Out of Your Bundt Cake Pan
What Is a Bundt Cake? Q&A
Time to Start Baking

The History of the Bundt Cake 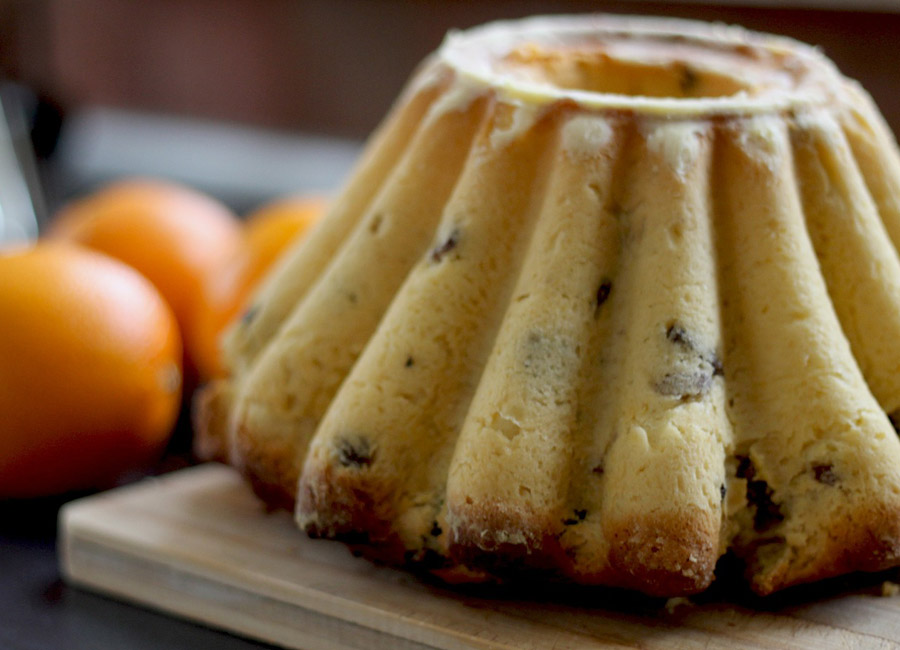 What is a bundt cake and when was the first one made? Depending on how in-depth you wish to go, the history of the bundt cake could go back hundreds of years.

While the word "bundt" wasn't popular until the mid- to late-1900s, its origins go back to traditional German and Nordic desserts. These cakes are what eventually inspired the modern bundt cake pan.

Most historians and cake-enthusiasts agree that bundt cakes come from the German Gugelhopf cake (also found under Gugelhupf, Kugelhopf, or other slightly different names).

Although this cake is typically associated with modern Germany, you can also find Gugelhopf in Austria, Switzerland, Poland, Serbia, Slovakia, Croatia, and other central European countries.

For a long time, however, Gugelhopf and similar desserts were considered an Old World tradition. If someone wanted to bake one of these cakes, they needed to rely on old, family pans that had been brought over to America. As you can imagine, these pans were few and far between.

​Nordic Ware was started by a Minneapolis-based couple in 1946. Dave and Dotty Dalquist started Nordic Ware by creating Scandinavian bakeware that wasn't available anywhere else in America. With Minneapolis' thriving immigrant population, Nordic Ware was able to survive despite its extremely niche market.

In the early-1950s, Nordic Ware (still just a tiny startup) was approached by a local Jewish community group in search of a traditional, ring-shaped pan. They needed this pan to make Gugelhopf, but couldn't find the appropriate bakeware in the U.S.

Agreeing to ​make these pans would change the Dalquist's lives forever.

However, the Nordic Ware bundt pans were far from an instant success. After all, most bakers only used these pans to create traditional cakes for special occasions. And if you weren't of Germanic descent, you probably didn't know these pans existed at all.

But in 1966, a Texas woman had a stroke of creativity when she used her old bundt pan to bake her entry for the Pillsbury Bake-Off. She called her creation the ​Tunnel of Fudge cake.

This annual contest was a hit with homemakers across the country, and when the Tunnel of Fudge cake won second place, everyone wanted a bundt pan of their own.

Since Nordic Ware was the only American company manufacturing bundt pans, there was just one place for these eager bakers to go. Despite other bakeware companies eventually releasing pans of their own, Nordic Ware remained on top.

According to Dave and Dotty Dalquist, their bundt pan sales went from practically nothing to millions of units per year.

Today, Nordic Ware is still the leader in designing and manufacturing these pans. If only Dave and Dotty knew how popular their bundt pans would be when they first started their company!

Getting the Most Out of Your Bundt Cake Pan 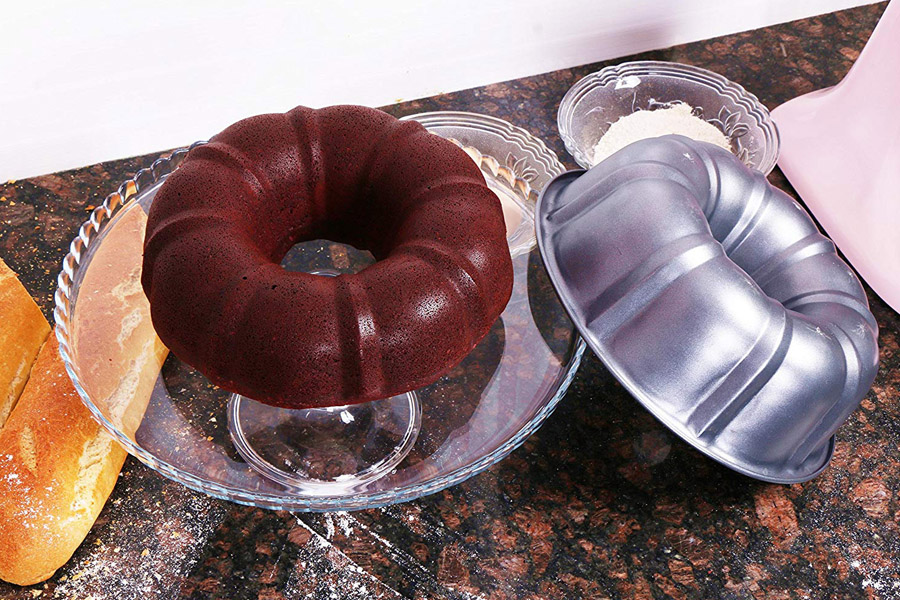 What is a bundt cake known for aside from being delicious? Unfortunately, many bakers avoid bundt pans because they are notoriously hard to release from the cake.

But with so many shapes and designs to choose from (some personal favorites are the Nordic Ware Magnolia or ​Harvest Leaves pans), bundt cake pans are one of the best ways to get creative with your baking. So how can you avoid disaster and get a clean, beautiful cake every time?

Be generous with the grease

Even with a normal bundt pan, there's plenty of surface area for your cake to stick. But if you're using a specialty pan that features designs or shapes, this can be an even greater concern.

To keep your bundt cake from sticking in the pan once baked, ​greasing is key. Go over every inch of your pan. And for good measure, go over every inch again. A bristled pastry brush, like this ​set from Tezzorio, is a great tool for the job.

To ensure a clean release from the pan, grease won't always be enough. We also recommend dusting the entire pan with flour and shaking away the excess.

If you follow these steps, double-checking for even the tiniest missed spots, your bundt cake should come out perfect.

When baking a bundt cake, removing the cake from the pan can be a headache. If you mess up, your beautiful bundt could completely fall apart.

Of course, thorough greasing is the first step to ensure your cake has a smooth exit. But proper bundt removal doesn't end there.

For the best results, we recommend setting a five-minute timer as soon as your cake leaves the oven. After that timer buzzes, it's time to remove the cake.

Start by placing a cooling rack over the cake pan and flipping both over. If you're lucky, the cake will slide out onto the cooling rack. If not, let the pan sit upside down for a minute. Give the pan and rack a gentle shake, repeating as needed until the cake releases.

Allow your bundt cake to cool completely on the rack before frosting.

Use the right frosting technique

What is a bundt cake without frosting? Actually, for many bundt purists, traditional cake frosting on a bundt cake is heresy. Doing so covers up the unique shape, especially if you use a specialty pan with molded designs.

To get the most out of your bundt cake, oftentimes​ drizzlin​​g is the best way to go. You can use a thick glaze to frost the cake without covering or potentially damaging the shape.

Another option is to dust your bundt cake with a delicate layer of powdered sugar, cinnamon, or anything else that sounds delicious. It helps add texture and a pop of extra flavor without covering your gorgeous baking.

What Is a Bundt Cake? Q&A 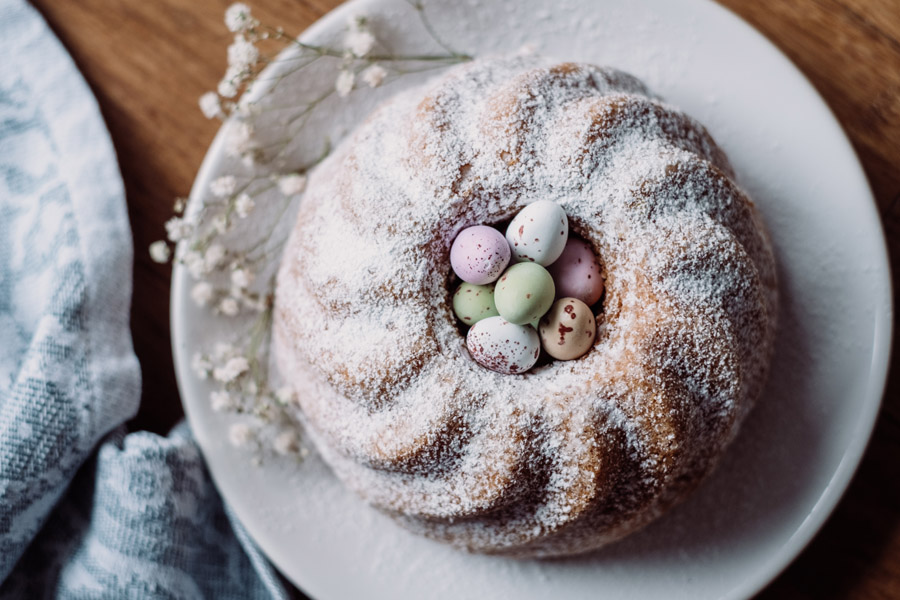 Here are some other common questions related to "What is a bundt cake?":

Where does the name "bundt cake" come from?

While the origin of "bundt" has never been 100-percent confirmed, the common story is that it comes from the German word "bund." Bund means a gathering of people or community. And since Gugelhopf-inspired cakes were baked for such gatherings, it became a common name for the dessert.

When Nordic Ware began creating their own pans at the request of their local Jewish community group, they supposedly added the "t" to help differentiate their product. Now, bundt-with-a-t is the preferred name for this pan and shape of cake.

What recipes work best in a bundt pan?

As mentioned above, technically any cake can be a bundt cake if baked in the appropriate pan. That said, there are some recipes that tend to fare better as bundt cakes than others. Oftentimes, this is because the hollow middle allows for better heat distribution throughout a thick or moist batter.

Most bundt cakes follow a ​basic recipe for butter cake, sponge cake, or pound cake. Bundt pans are also great for adding nuts, fruit, and more to your cake batter. Just remember that anything you want on top must go in the pan first!

How do you convert a normal cake recipe to a bundt pan?

In general, the recipe for a two-layer, nine-inch cake will fit into a standard bundt pan (which holds 15 cups). Since the bundt pan is larger and deeper, you'll also need to increase the baking time for your recipe.

Depending on the recipe, this is normally two or three times the original time. However, this can vary.

When converting any recipe to a different size or shape of the pan, we recommend keeping an extremely close eye on your cake. And if you're baking the cake for a special occasion, consider making a test cake to help nail down the baking time beforehand. 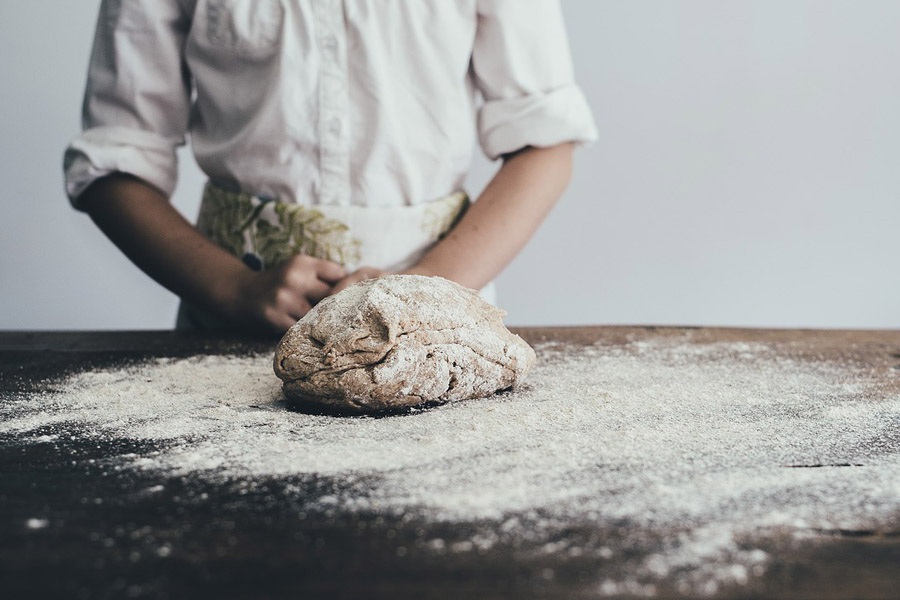 Whether you're already a bundt-enthusiast or are looking to expand your baking horizons, bundt cakes are a unique and creative way to shape your desserts. And knowing what is a bundt cake and how it first came to be will help you appreciate this dessert even more.

From the standard ring-shaped pan to those molded in the shape of plants or animals (or even sand castles), the bundt cake has changed considerably since its humble beginnings in Minneapolis. We're excited to see what new shapes Nordic Ware and other companies will think up next.

Does your family have a bundt pan handed down from the very first production waves? Or do you have an heirloom family recipe for bundt cake that makes an appearance at every holiday gathering? Let us know your favorite bundt cake recipes or stories in the comments below!